Let me first say that, as my West African friend Simaga tells me, I have a “good wife”.  This weekend would have been a disaster without her flexible and adaptable African attitude.

The kids had a fall break with a Friday and Monday off from school. We decided it was the perfect time for some quality family time in the wilds of Africa.  I had heard a lot of neat things about the Aberdares National Park 2 hours north of Nairobi.  In fact some friends had told us about a cabin you could rent from the Kenya Wildlife Service.  It didn’t have electricity, but there was a caretaker who lived close by that would supply firewood, and keep the water hot.  The Aberdares are a mountain range right on the equator but over 12,000 feet in elevation. It is not uncommon to have frost on the ground in the mornings – thus the hot water was a big selling point with Sarah and Rainey.

We packed the suv – loaded up all the essentials, including two extra kerosene lanterns, flashlights, food, pots, pans, games, clothes etc.  Most of the clothes went in a water proof duffel bag a friend had given us from the states.  Being tight on space, I threw the big duffel on the roof and strapped it down with a bungee cord.  Everything else somehow fit inside with the 6 of us.  Friends told us it would take 2 hours to the nearest gate from Nairobi.  We left at 11:00 and stopped to get some kerosene.  I had saved on old soap can (which I had been itching to reuse) and filled it up with Kerosene and set in the rear of the suv.

We took off in the right direction and only took about 40 minutes to get lost.  Africans don’t put a high value on signage.  So after asking for directions a couple of times, we drove through a torrential thunderstorm, complete with hail.  In the midst of the blinding rain we hit multiple speed bumps (they are everywhere here and locals call them sleeping police) at speeds faster than they were designed for.  Shortly thereafter we start to smell kerosene.

We make a few more turns and finally confirm we are headed in the right direction.  3 hours and 45 minutes after leaving, and 1 hour 45 minutes after our friends told us we should be there, we arrive at the gate to the National Park.  It was still raining and the guards laughed at the fact that I had a bag on my roof.  I tried to explain it was waterproof but they just kept laughing.

We drove another 30 minutes through the national park on dirt roads with little signage and finally found our cabin.  It was rustic, but about what we imagined.  Beds were made, it was clean, and the fireplace was ready.  The rain was ending and the air was cold.  I would guess it was in the fifties and heading much lower with darkness coming.  The caretaker brought us some extra lanterns and our first load of firewood.  Sarah started unpacking the food and preparing supper.

Being the domestic despot that she is, she had made two casseroles that she could simply warm in our awesome cabin.  She looked around in the sparse kitchen and there was no gas oven as had been advertised.  Frustrated, she made alternative plans and decided to simply place the frozen casserole dish on the gas burner on low.  I began unpacking the things from inside the car, all of which smelled like kerosene because my container had been leaking and our  numerous encounters with over zealous speed bumps.

I was outside when the explosion rang out over the mountains.  We went in to the small kitchen to see the frozen casserole on top of the range without any glass casserole dish – it had detonated and shattered into a million pieces, on the floor, on the countertops, and in the casserole.  Supper was in peril but we did not fret because we focused on the fact that we had hot water for a good shower and plenty of dry clothes to put on and enjoy the warmth of the fire.  As Sarah worked on another supper adjustment, I went to find the caretaker to ask him about the fire for the hot water tank.  He lowered his head and said “uhh... I am sorry but the hot water tank is not working…. a family of elephants came through Tuesday and knocked it over and snapped the pipes.”  I asked him if he could walk back to the cabin with me and explain that to my wife.  He declined.

As I strolled back to the cabin I thought of ways to spin the no hot water predicament and came up with nothing – except the cool fact that elephants frequent our yard.  That did not impress the girls – the boys however went on an instant search for elephants.  Supper was almost ready, the fire was going (slowly with wet, soft wood), and Sarah was ready to change into some clean, dry, and warm clothes.  She unpacked the bag that had been on top of the car to find the clothes soaking wet.  We ate our spaghetti by the faint light of the lanterns, with the delicious aroma of kerosene, the potential surprise of glass in our food,  surrounded by wet clothes that were hung everywhere possible to dry.  We finally made it to sleep that evening shivering in damp, cold, dirty clothes under insufficient blankets with everything we brought strung out all over the cabin drying.

It was all uphill from there.  The next day was awesome.  We saw elephants from our front porch, waterbucks in our yard, and Sarah had an up-close encounter with a Bush Duiker on a hiking trail.  We found two of the most beautiful waterfalls we had ever seen, and visited “Queen’s Cave” at Magura Falls which is named for Queen Elizabeth.  She was there visiting and having “high tea” when she received word that she had ascended to the throne when her father died. We made our way back to the cabin seeing various animals and came across some huge leopard prints in the road – we had just missed him!  Sarah won our double elimination checkers tournament that evening and received a nice rock from Queen’s Cave as her trophy.

The next morning we made pancakes and ate on the porch (at least the boys braved the cold) and then had family worship before we packed up and started for home.   We were going to drive to another section of the park for another game drive but fog had settled in very thick – and visibility was extremely limited.  We did however come across a small herd of Cape Buffalo who weren’t too far away.

Family vacations are never without their obstacles but we pushed forward and enjoyed the good things.  I am thankful that even a long ways from home and our extended family, God has allowed us to have some neat times together making memories that will last a lifetime. 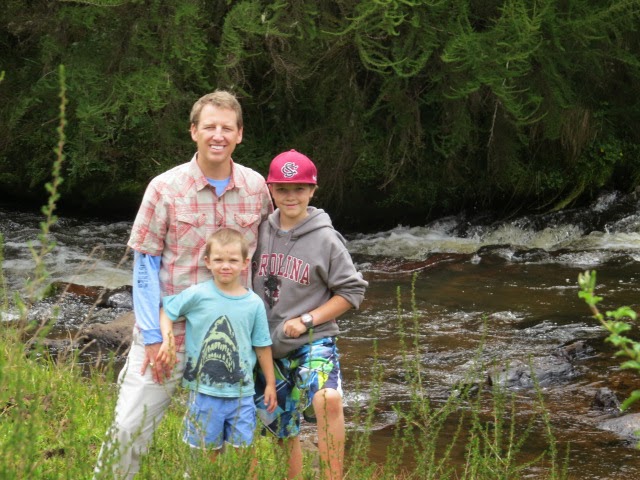 Posted by Unknown
Email ThisBlogThis!Share to TwitterShare to FacebookShare to Pinterest